“I pray you all, give your audience and hear this matter with reverence by figure of a moral play. The Unifying of Woman called it is. The story says: Woman, in the beginning rise up and fight ‘til the end. But be warned. Take no vanity when you march in unity or all will be forlorn. Here shall you see how Privilege, Prejudice, Power, Ignorance and Color will fade from thee as flowers in May. For ye shall hear how Intersectionality calleth Women to a general reckoning.”

So speaks the Narrator at the opening of a feminist adaptation of Everyman by two students for a final project in my Fall 2014 Introduction to Contemporary Performance course. The class covers American alternative theater and performance from the period between 1960 and the present and often includes work by companies and artists such as the Living Theatre, the San Francisco Mime Troupe, Adrienne Kennedy, Chris Burden, Marina Abramović, Anna Deveare Smith, the Wooster Group, and Mabou Mines. I am drawn to this genre of theater and performance because the work often emphasizes staged representations of gender roles and relationships, which encourages students to engage critically with questions of gender and sexuality as well. I suspect it becomes apparent to them quickly that I want them to do so. 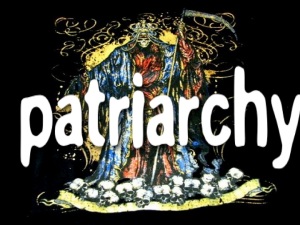 An allegorical figure from Everywoman

For the final project, students may choose between writing a research paper and creating and performing an original scene. The scene assignment requires them to draw inspiration from the work of one or more of the theatrical and performative strategies we have studied in class. In this case, the students successfully used the technique of adaptation (which we had looked at in Split Britches and Bloolips’ Belle Reprieve and The Rude Mechs’ The Method Gun) to convey their own feminist ideals.

Whenever possible, as part of my feminist pedagogy I promote a pro-choice approach to final course projects. That is, I want students to choose the medium they feel they can best manipulate to communicate their individual perspectives about the material we have studied. The Everyman adaptation, Woman, was particularly exciting to me because it fulfilled that proposition. Furthermore, without my having explicitly told them to do so, these students appropriated a foundational text from the traditional theater history canon for their own feminist purposes. It must have been all that Peggy Shaw and Lois Weaver they watched. As the Woman says at the end of their adaptation, “I want to be a good feminist. I want to be a good feminist. And if that means I have to start thinking intersectionally to keep moving forward, then so be it.”