On the final morning of ATHE 2014, over a dozen conference attendees gathered for the roundtable “Fantasy Feminisms: Dreaming of the Perfect Syllabus.” The original CFP asked for participants to submit “fantasy” or “reality” syllabi to shape an ongoing discussion of how theatre can be taught with feminist intentions. We wound up with four syllabi based on actual classes and one fantasy syllabus.

The session began with Catherine Young’s opening remarks on the impetus for the roundtable and explaining to the audience that panelists had already exchanged syllabi and assignment descriptions and had utilized the FantasyFeminisms blog to comment on each others’ contributions. Each participant then shared work with the audience by either clicking through the blog in real time or by sharing a PowerPoint presentation. Jessica Del Vecchio moderated a discussion among participants that quickly segued into a rich conversation among audience members and roundtable participants.

Some of the questions that were discussed are:

It was a great morning and left us excited for ATHE 2015!

Catherine Young is a doctoral candidate in Theatre at The Graduate Center, City University of New York. Her dissertation examines the material conditions and symbolic

meanings of animal performances in big-time US vaudeville. Young’s essay “‘A Very Good Act For an Unimportant Place’: Animals, Ambivalence, and Abuse in Big-Time Vaudeville” will appear in the collection Performing Animality, edited by Jennifer Parker-Starbuck and Lourdes Orozco (Palgrave Macmillan, 2015). Her performance and book reviews can be found in Theatre Journal and Theatre Survey. Young teaches Introduction to Theatre Arts and Introduction to Acting at Baruch College, where she is also a Communication Fellow.

Jessica Del Vecchio is a doctoral candidate at the Graduate Center at the City University of New York, where she is working on a dissertation that analyzes the recent resurgence of

explicitly queer and feminist performance in New York City’s experimental theatre scene. She received her MA from the Performance as a Public Practice Program at the University of Texas at Austin. She has published in TDR and Theatre Journal, and she wrote the instructor’s manual for the 2012 edition of Mira Felner’s textbook THINK: Theatre. She teaches in the Theatre Department at Hunter College and is a Communications Fellow at the Bernanrd Schwartz Institute at Baruch College. She is a performer and founding member of Ménage à Twang, the queer musical comedy trio.

Gwendolyn Alker is a teacher, curator, dramaturge and scholar. She has been on the Fulltime Faculty of New York University’s Drama Department since 2003, where she

teaches theatre and performance studies including classes on gender, latino performance, and embodiment. She has published in journals such as Theatre Journal, TDR, Dance Research Journal, is the former managing editor of Women & Performance: A Journal of Feminist Theory, and the current Co-Editor of Theatre Topics. She has also organized a number of performance events including the 2010 NYC Fornes Festival and ATHE’s 25th anniversary conference in Chicago in 2011.

Jessica Silsby Brater is a Visiting Assistant Professor & Theater Program Director at the University of New Haven, where she teaches courses in theater for community impact,

contemporary performance, and theater history and directs as part of the UNH season. Her current book project, Ruth Maleczech at Mabou Mines: Woman’s Work, is forthcoming from Methuen Drama in 2015. Brater’s writing appears in the current volume of Samuel Beckett Today/Aujourd’hui and she is contributing chapters to Women, Collective Creation, and Devising, edited by Kathryn Syssoyeva and Scott Proudfit and Adaptation and Devising: creative processes and contemporary performance, edited by Adam Ledger, both forthcoming from Palgrave MacMillan. Brater is founding co-artistic director of Polybe + Seats, a Brooklyn-based theater company that often works site-specifically. Her most recent work for the company, Anna Asli Suriyah (I Come from Syria), conceived with Sarah Sakaan, took on the political and humanitarian crisis in Syria and was performed tri-lingually with a multicultural cast. Brater’s newest directing project, Kohl Black and the Right Way to Pray, also by Sakaan, builds on the company’s interest in Arab-American theater and is being developed in residency at the LaGuardia Performing Arts Center in Queens, NY. Brater holds a BA from Barnard College and a PhD from the Graduate Center, City University of New York.

of American hyphenate identity through ethnic public performance in early 20th century Chicago.  Her work has been published in New England Theatre Journal and Modern Drama. She is the Graduate Rep for the Theatre History Focus Group for American Theatre in Higher Education and an officer for the Ethnic Studies Graduate Student Colloquium at NU. She recently received a Mellon Foundation Humanities Without Walls: Global Midwest Grant for her work on turn-of-the-century Polish Chicago dramatic literature. Megan’s work can also be seen on Chicago stages where she has dramaturged for productions at Court Theatre, Timeline Theatre, and others.

Talya Kingston, Visiting Assistant Professor of Theatre in the School for Interdisciplinary Arts at Hampshire College, specializes in dramaturgy, dramatic literature and theatre for social change. She received a B.A. (Hons) from Stirling University in Scotland and an M.F.A. in dramaturgy from the University of Massachusetts.   Talya held the position of

Director of Education at Hartford Stage where she was the dramaturg for Eve Ensler’s Necessary Targets, and initiated a teen performance ensemble and the teenage playwriting competition Write On!  Prior to that, Talya spent five years running the YouthAware Theatre-in-Education touring division at the New Conservatory Theatre Center in San Francisco. She writes theatre reviews for the Valley Advocate and Howlround, delivers audience lectures for Chester Theatre Company, is part of the Literary Team for Company One in Boston and teaches an annual course at the Edinburgh Festival Fringe. www.talyakingston.com

Emily Klein holds a PhD in Literary and Cultural Studies from Carnegie Mellon University (2010) and a BA from the University of California, Los Angeles (1999). Her teaching and scholarship focus on twentieth and twenty-first century American political theatre, women 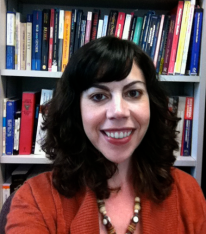 and gender studies, performance theory, media and film studies, and cultural studies. She also has more than ten years of experience as a writing and composition instructor. Her first book, Sex and War on the American Stage: Lysistrata in performance 1930-2012 was published by Routledge in 2014. Her articles have appeared in Frontiers, Women and Performance, and American Quarterly. She is currently developing an edited collection, Performing the Family Dream House: Space, Ritual, and Images of Home with theatre scholars Jill Stevenson and Jennifer-Scott Mobley.